Integrity. Caring. Excellence.
Academics and Programs
Our Faculty and Staff 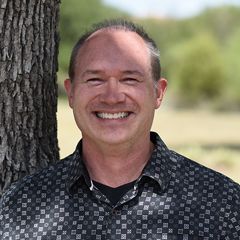 Van Tracy directs the middle school choir and spring musical theater production as well as teaching the 3rd and 4th grade general music classes.  Van graduated from the esteemed University of Cincinnati College Conservatory of Music with a B.A. in Musical Theater, and is a member of Actors Equity Association.  After 10 years as a professional actor and musician, Van changed course and obtained his Juris Doctor from Fordham University Law School in New York City.  Van’s law career included trial work with the NYC Corporation Counsel and then corporate law after moving from NYC to Austin in 2008.

Van stayed active in the arts in Austin performing in local productions, a regional television commercial, doing voice-over work for video games, and narrating over 30 audiobooks (including Governor Abbot’s “Broken but Unbowed”).  Van’s insatiable passion for the arts finally dictated a departure from law and a return to music, theater and the arts in the fall of 2017 when he joined the St. Gabriel’s family and never looked back.  Van and his wife Julia keep busy with their two children (Zander & Lydia), dog, cat, two mini donkeys, horse and two chickens on their property in Bear Creek.  Van is an avid Green Bay Packer fan (bragging as a “part owner” of the team via a gift of one share of stock), and is one of the better whistlers you may ever hear.
BACK TO FACULTY AND STAFF BIOS

Pre-K3 – 8th Grade
Schools within the Diocese of Austin do not discriminate on the basis of race, color, national or ethnic origin in: (i) the admission of students; (ii) the offerings of rights, privileges, programs, or activities generally made available to their students; or (iii) the administration of educational policies, admissions policies, loan programs, athletic programs, employment practices or policies, or other school-administered programs.